Another week, another spend fest.
Both heads are now finished and don't they look fine. 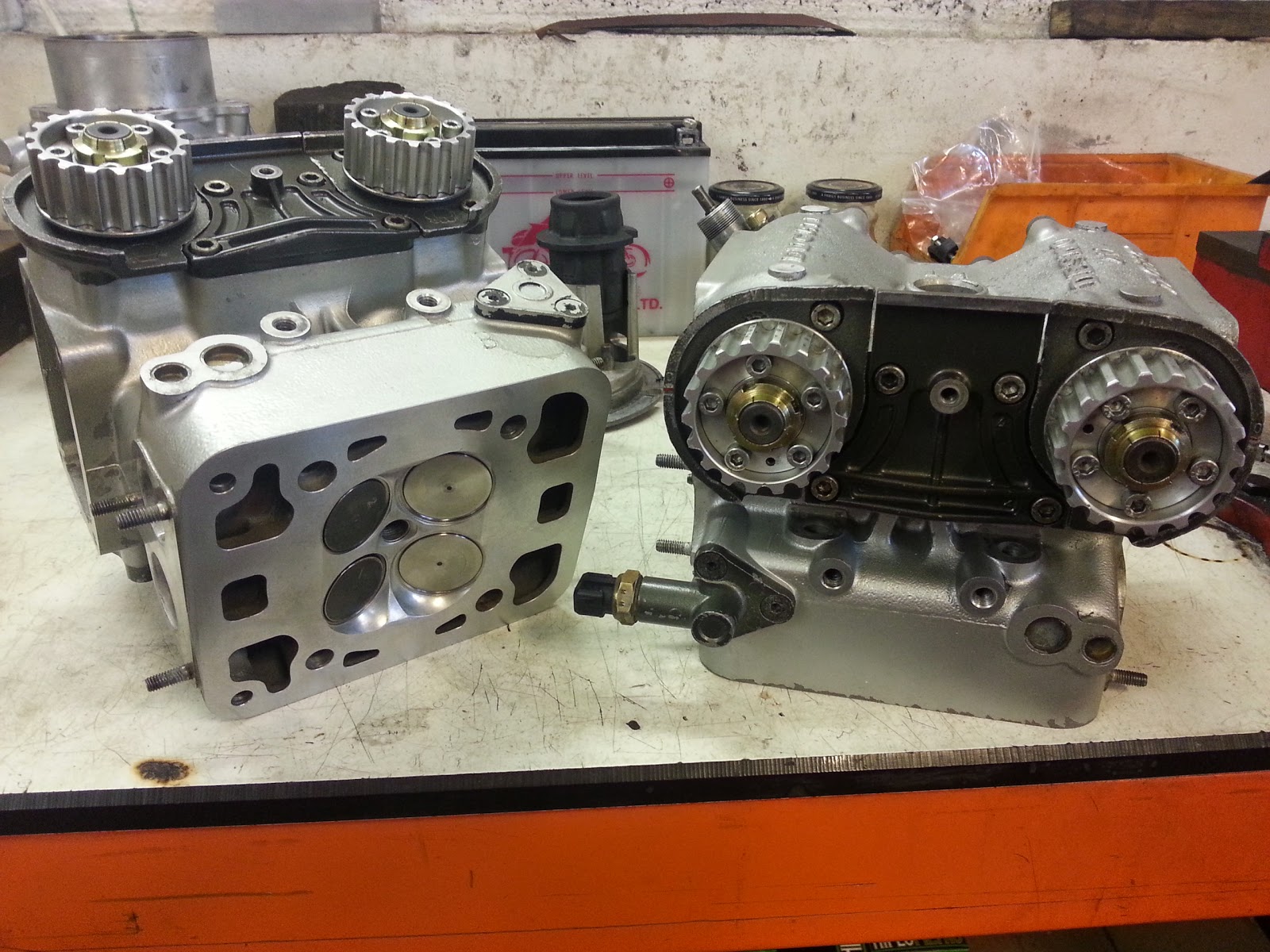 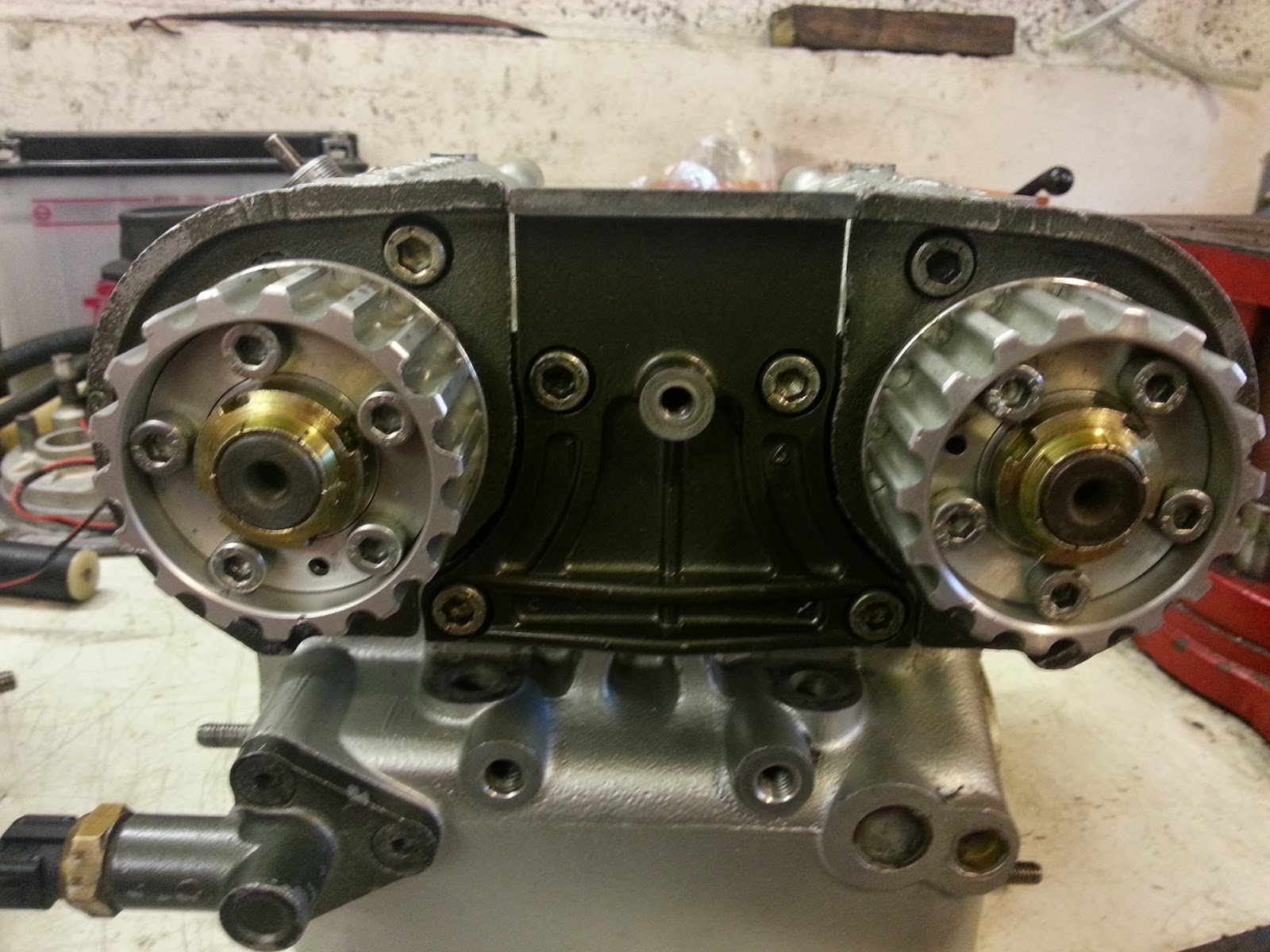 
As you can see one of the few good things that came with the original bike are this set of V2 adjustable cam pulleys. These give the ability to set and fine tune the opening and closing of the valves, not surprisingly most bikes that come from Ducati out of the crate are just given a factory setting. So there are little improvements to be made on nearly every Ducati on the road. If you'd like to learn more why not visit Brad Black's very informative data hoard here http://www.bikeboy.org/. As with most things on this build the pulleys you see above have had to have a strip and clean due to an excessive use of Loctite when not required. The barrels are still away being re-bored and honed so that delays the engine build another week or two as the crank still has to go to be balanced. Both wheels are now in for powder coating as well as a few other components, these should be back next week along with the frame when I can start building the rolling chassis. This should then give you all something nice to view.  That said here's a view of another nice pair. 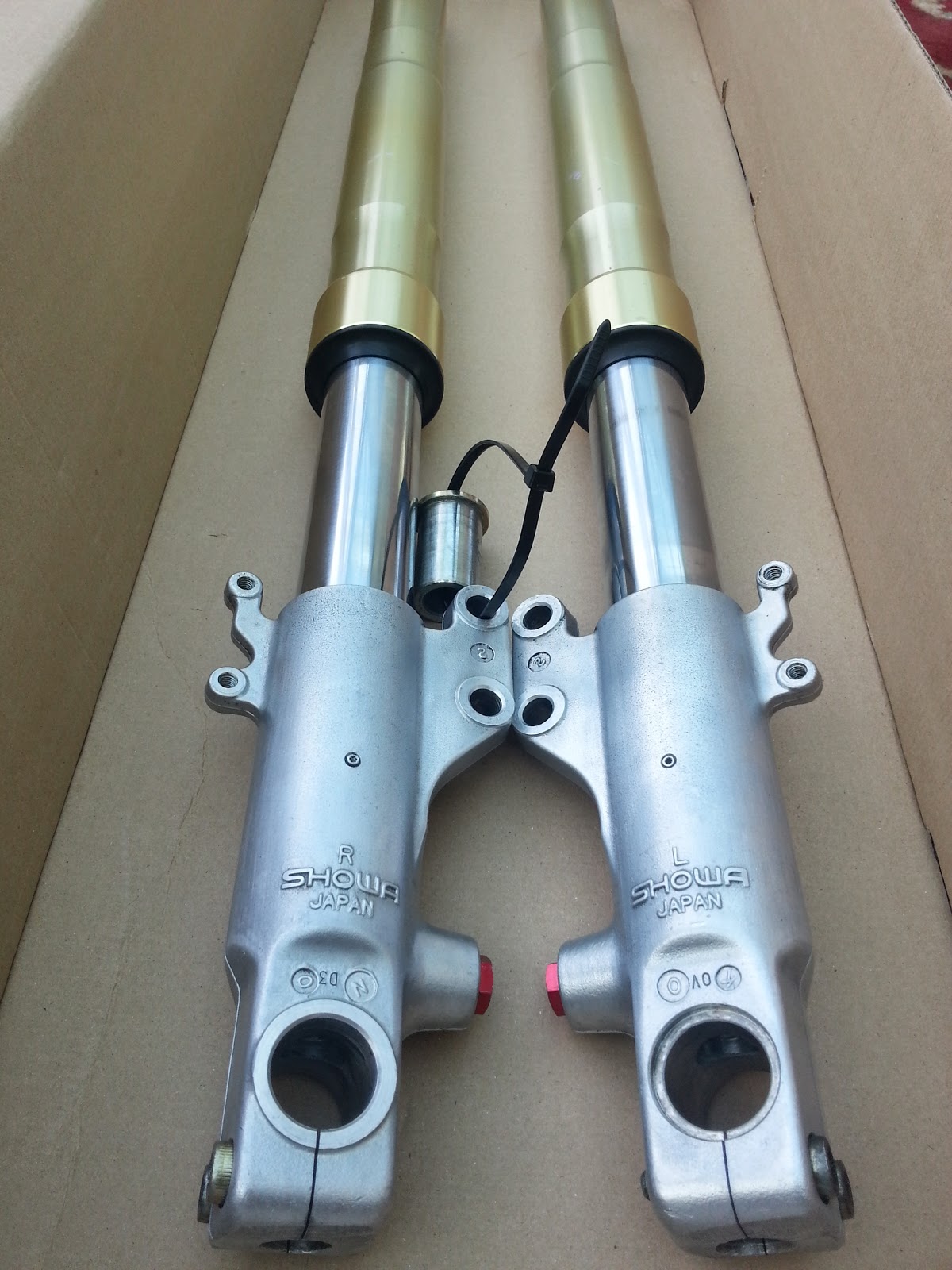 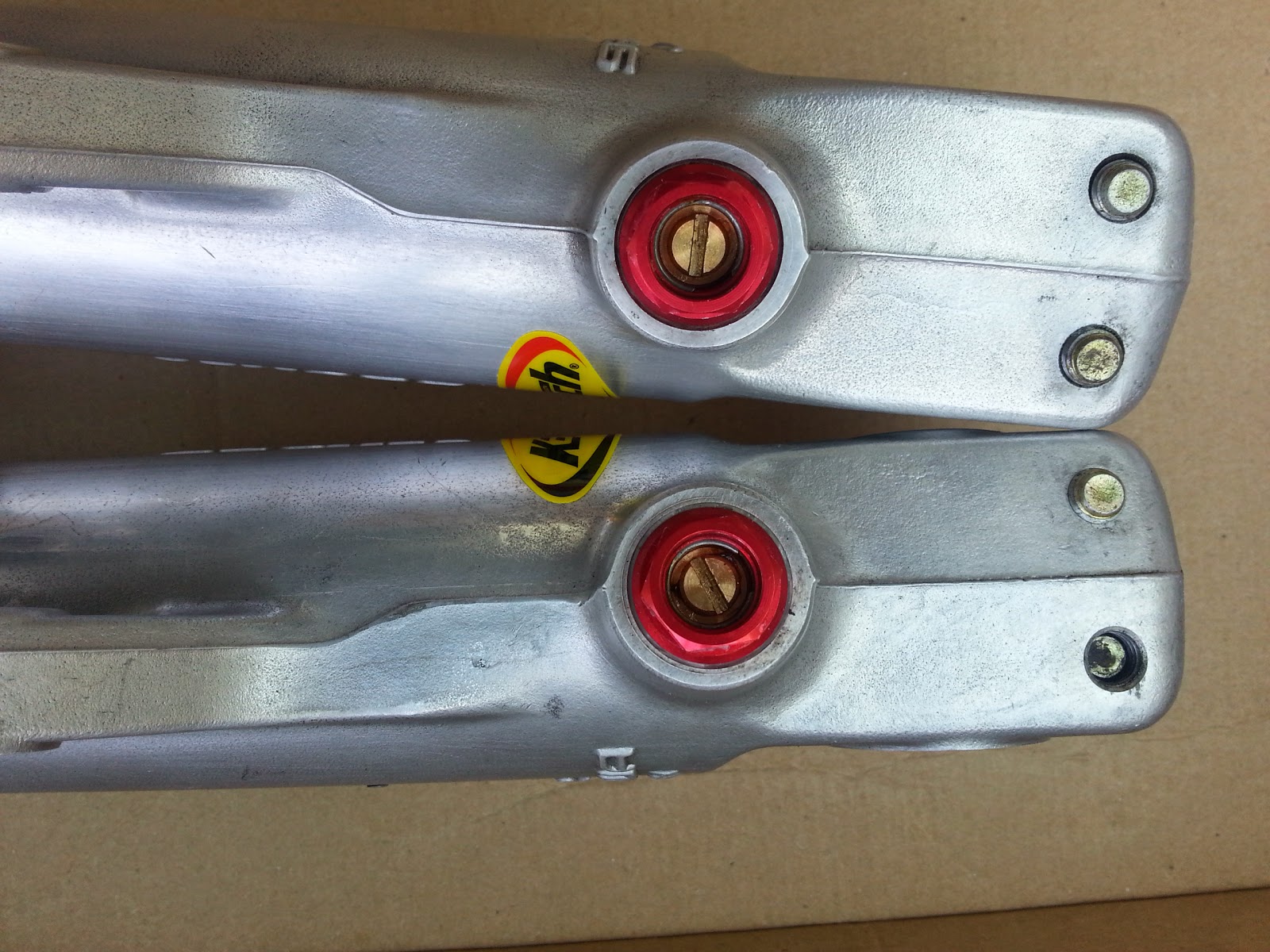 After a quick turnaround the forks have returned with all new 20mm pistons kits and rebound adjusters, also fitted are new fork springs to suit Stu's weight. The bike also has a name now, but more of that next week.

Like so many projects, after a flurry of initial activity it's all been quiet on the 888 front for a while. Like a snowball at the top of a hill they do have the tendency to get bigger as they roll down, so at some point I do expect a whole package of things to assemble.

So where are we today?

Well to be honest it's not, but never fear stuff is going on. The frame is away for powder coating into gloss white, wheels and other parts to follow shortly. This is all being done by Nick Anderson at Reality Motor Works, I've had work done by Nick before and it is always of the highest quality, so if you need anything sorted just click on the link above for contact details.
The forks are off to either K-Tech or Maxton for a service and an upgrade with some new internals. It does cost a few bob but I'm trying to make the best I can inside the budget. Although I seem to be following Labour's old policy of spend, spend, spend, maybe we should call it Gordon Brown Racing. 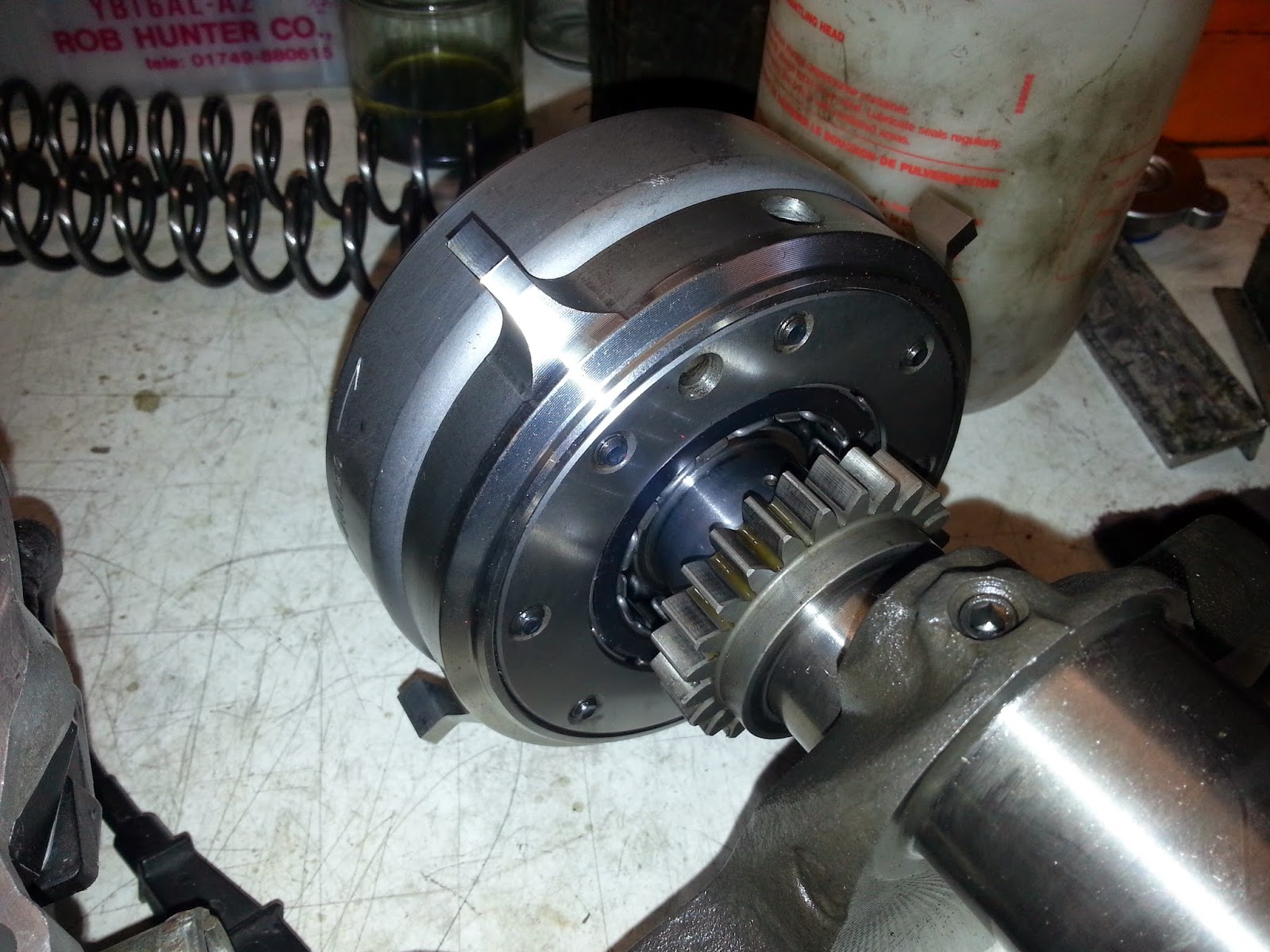 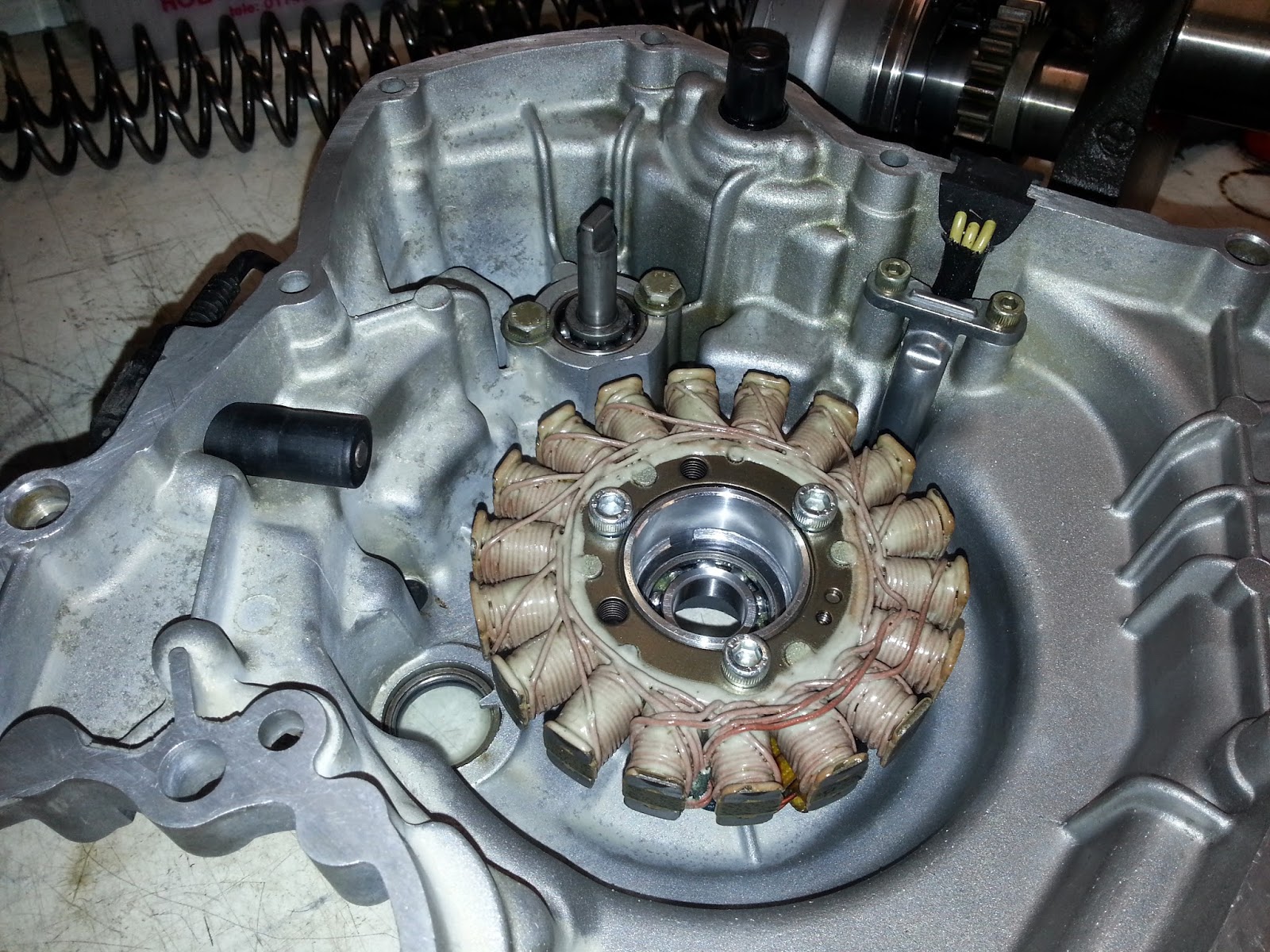 Some highs and lows, sort of as expected really. The highs are that the heads are now rebuilt. These looked so different at Louigi's last week  that I didn't even recognise them! One new valve guide was fitted as it was cracked, all the valves have been lapped in by hand. Next they have been fitted with lighter action RS springs, these give less resistance to the rotation of the belts and subsequently a little more power. Now these are really only suited to higher revving (racy) engines due to their lighter action so the tick over will be set higher at about 1800rpm. When at speed more of the sealing action is aided purely by the action of the valve moving north at speed. Clearances on the closure shims has been set to zero effectively, again to aid sealing, this was precision set by Chris by using a diamond lap to polish shims to his exacting satisfaction. 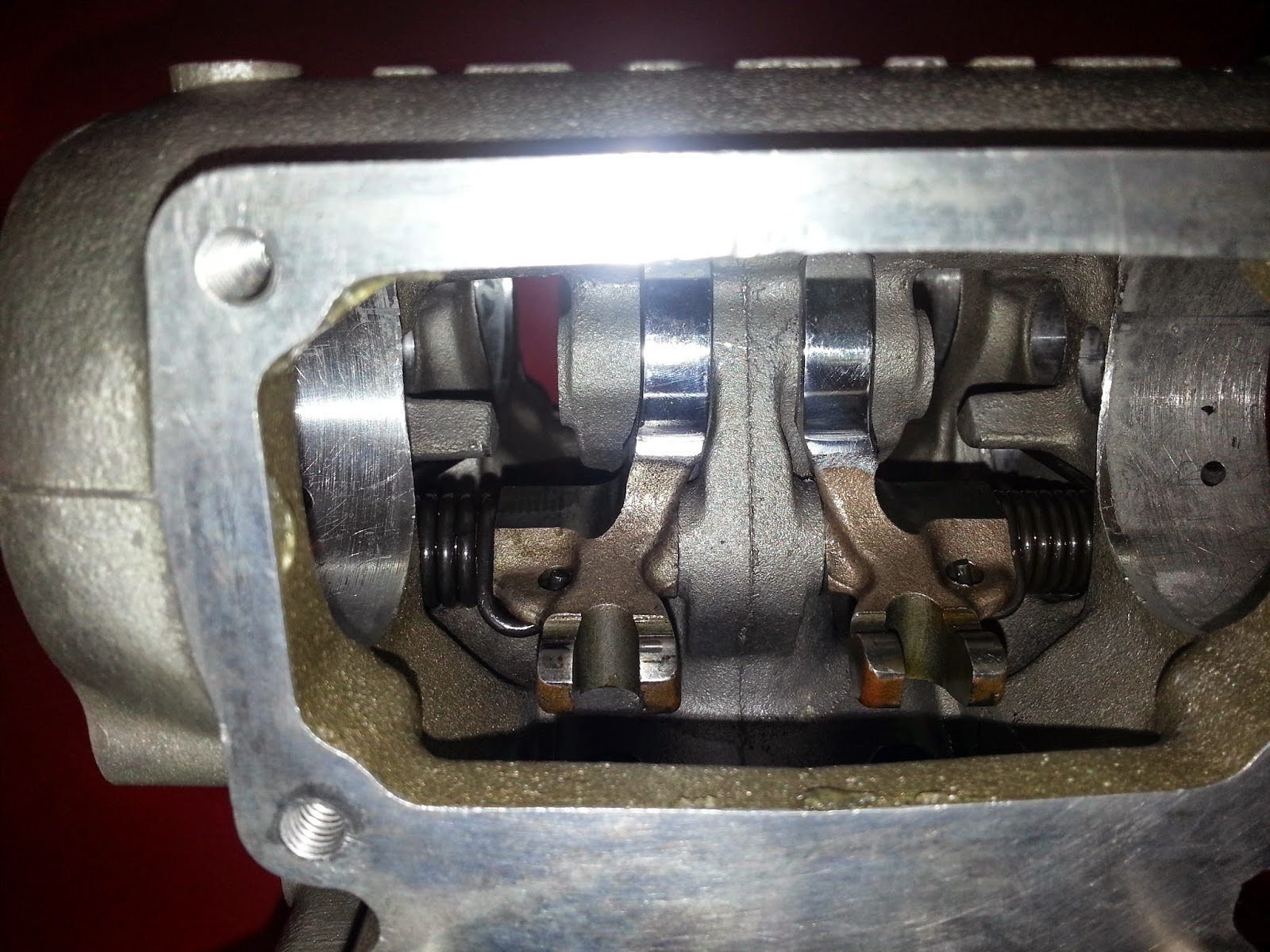 Chris dummy assembled this to show me the difference in pressure between the two types, and it really is staggering when you press down. Those of you with keen eyesight will see the difference between the standard and RS springs. The heads have been skimmed as well to give a slight rise in compression as we are using standard flat top 916 pistons. 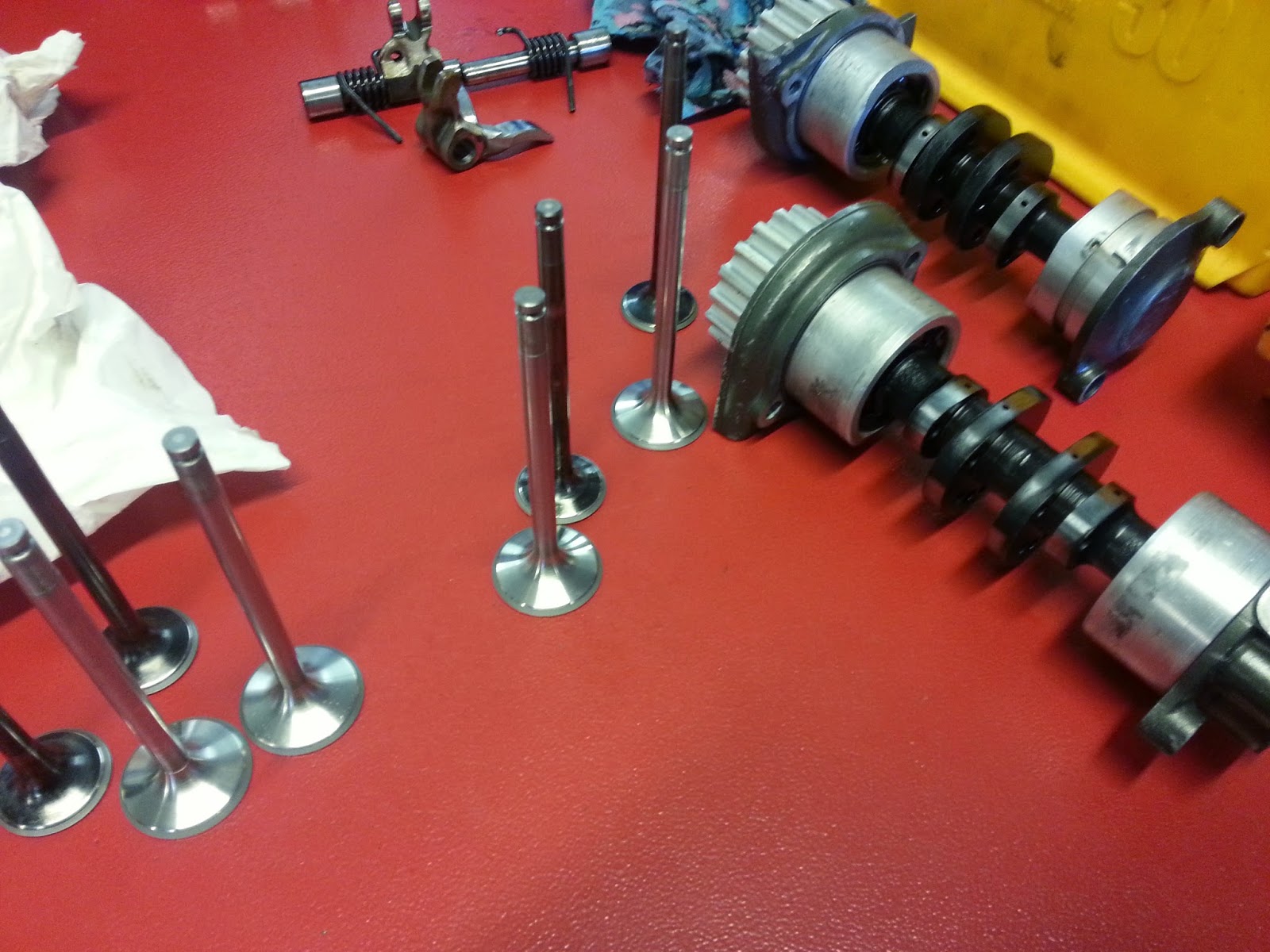 Standard cams and valves are going back in and with the other tweaks being made this should still give enough power to be competitive without failing to finish. 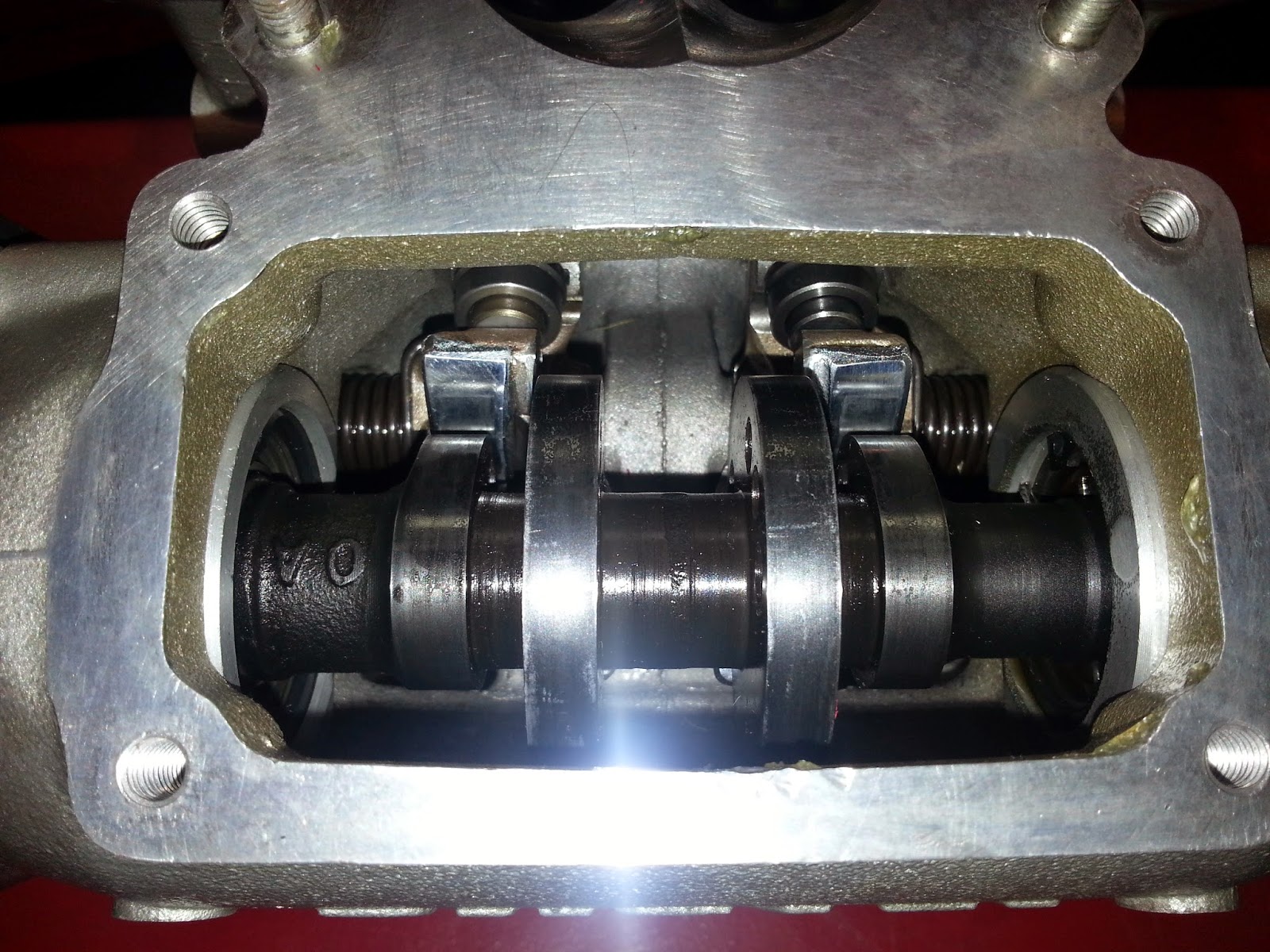 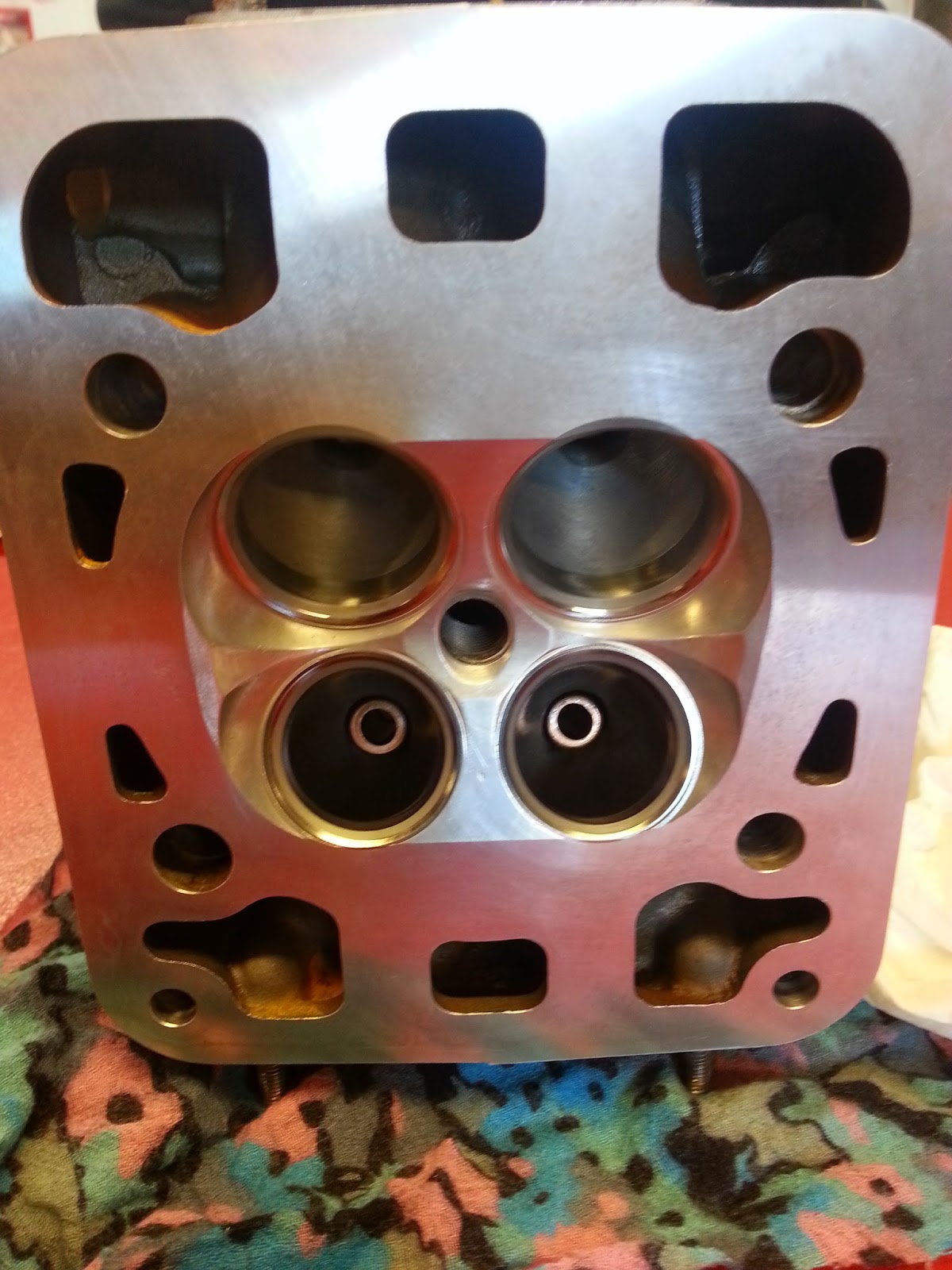 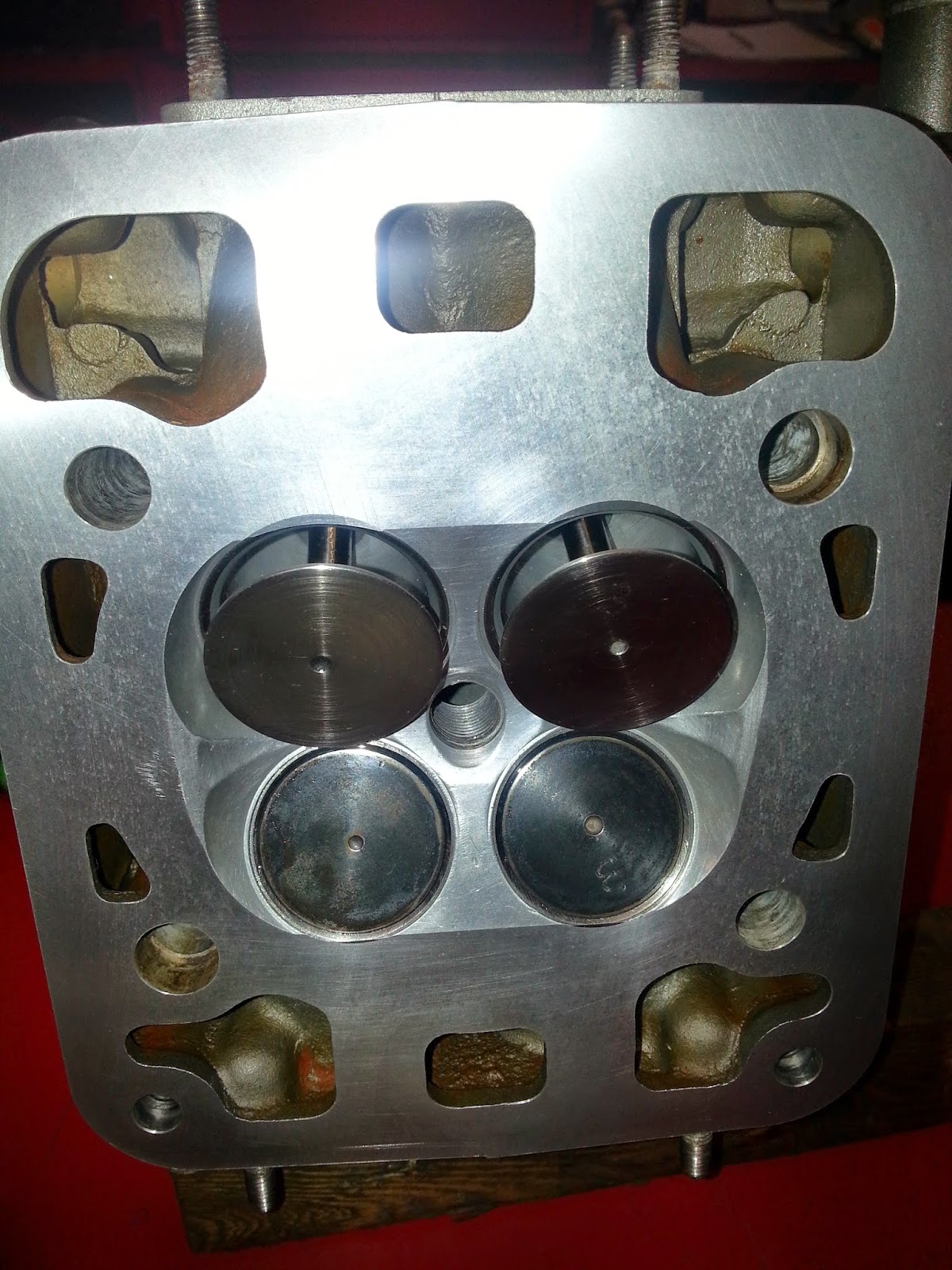 It looks stunning when complete, you really need a perspex side on an engine to fully appreciate what's inside.

This week I have to drop of the 748S barrels for a re-bore, Nikasil coating and honing to suit the new pistons. We've had to do as the original barrels have such a hard coating that the engineer has been unable to get a decent hone from it. The upside is better cooling with the 748 barrels, the downside is another bill. Once that is done the crank assembly can be built and go away for balancing. After that is done this lot can start to go back together with new mains and gearbox bearings. 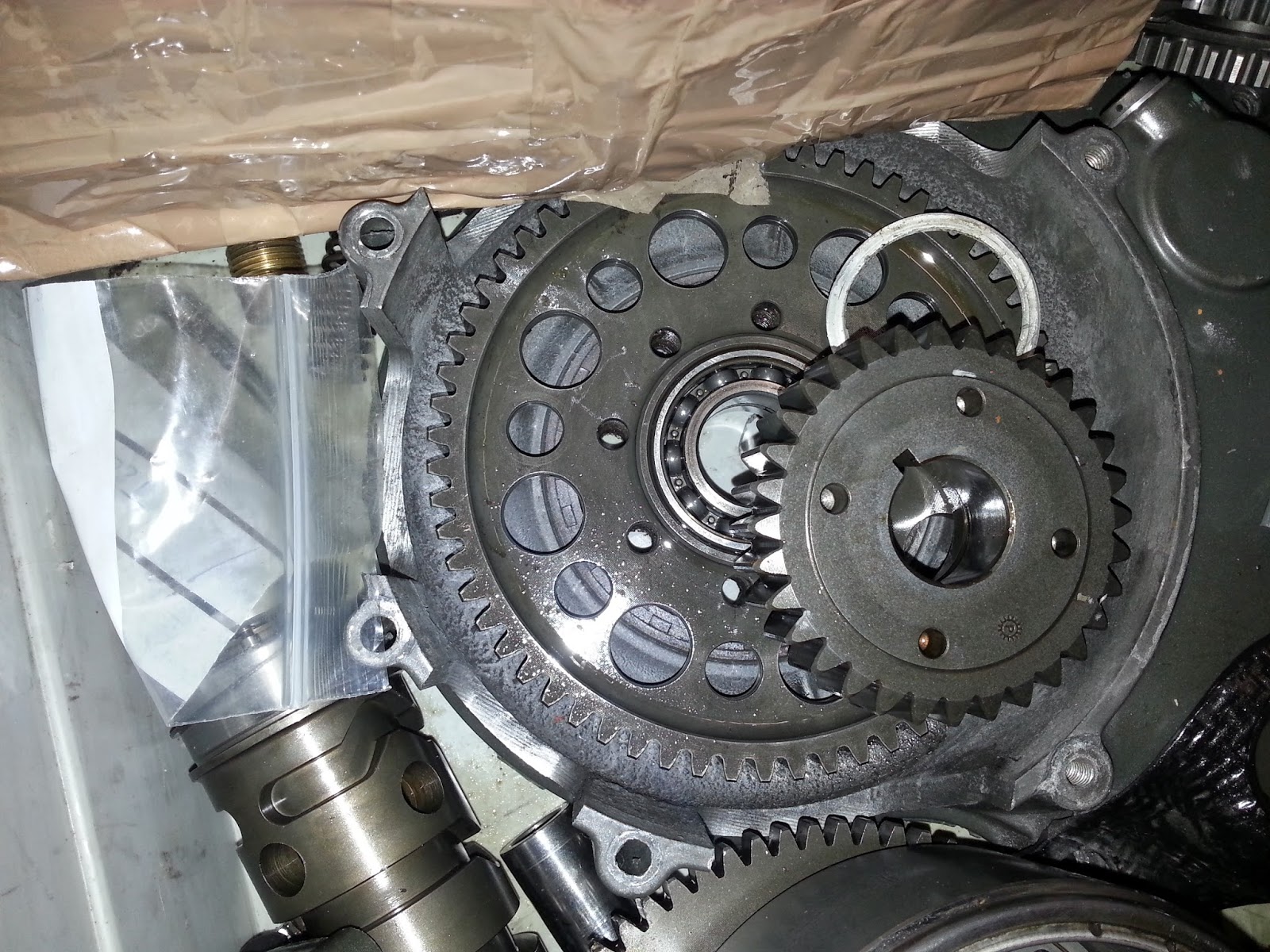 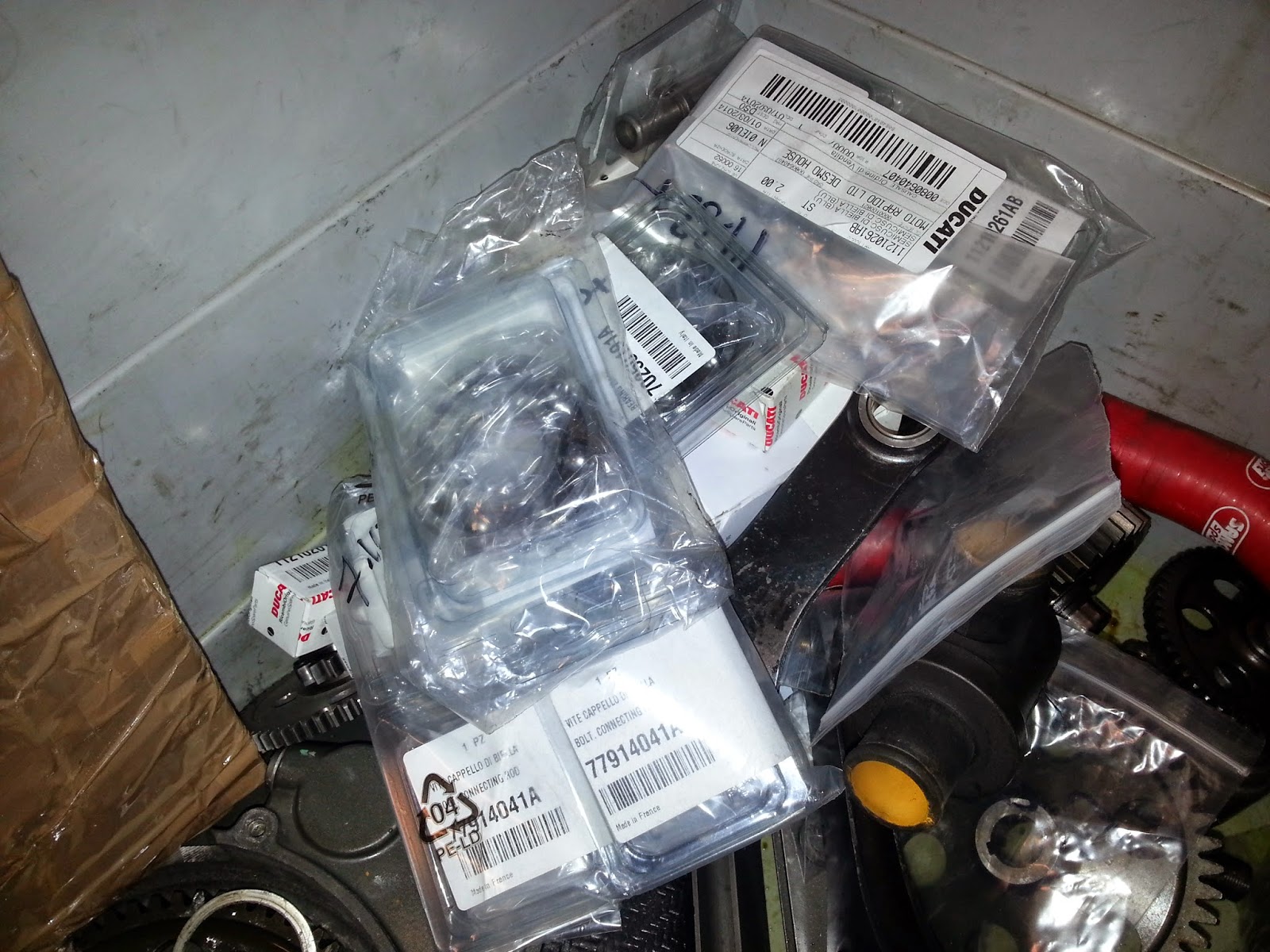 My thanks go out to James White of Willow Services and Guy Burton of Burton Engineering for their kind offers of a set of tyres each. (It's in print now chaps!) This means a great deal to me as they are friends that have come on board to assist with as much passion I think I as have to finish this project. I think together with the main sponsors we can build a bike that will do Stuart proud at the Classic.

In the meantime I have a set of knackered throttle bodies to sort out!