But let's just step back and review what's been going on. So with the heads built, the crank balanced and the re bore back the engine was left with Chris to get stuck in. Due to having to be at the UKMOC weekender I had to miss the birth but did get over a week later to see the umbilical cord get cut, well by that I mean see the cams get dialled in. Prior to this a few other little internal jobs took place with the main bearing holders changed for later ones and a better shim selection. This entailed having the sockets bored to accept the later type. The crank has had some small tear drops added to the big ends to aid oil flow. 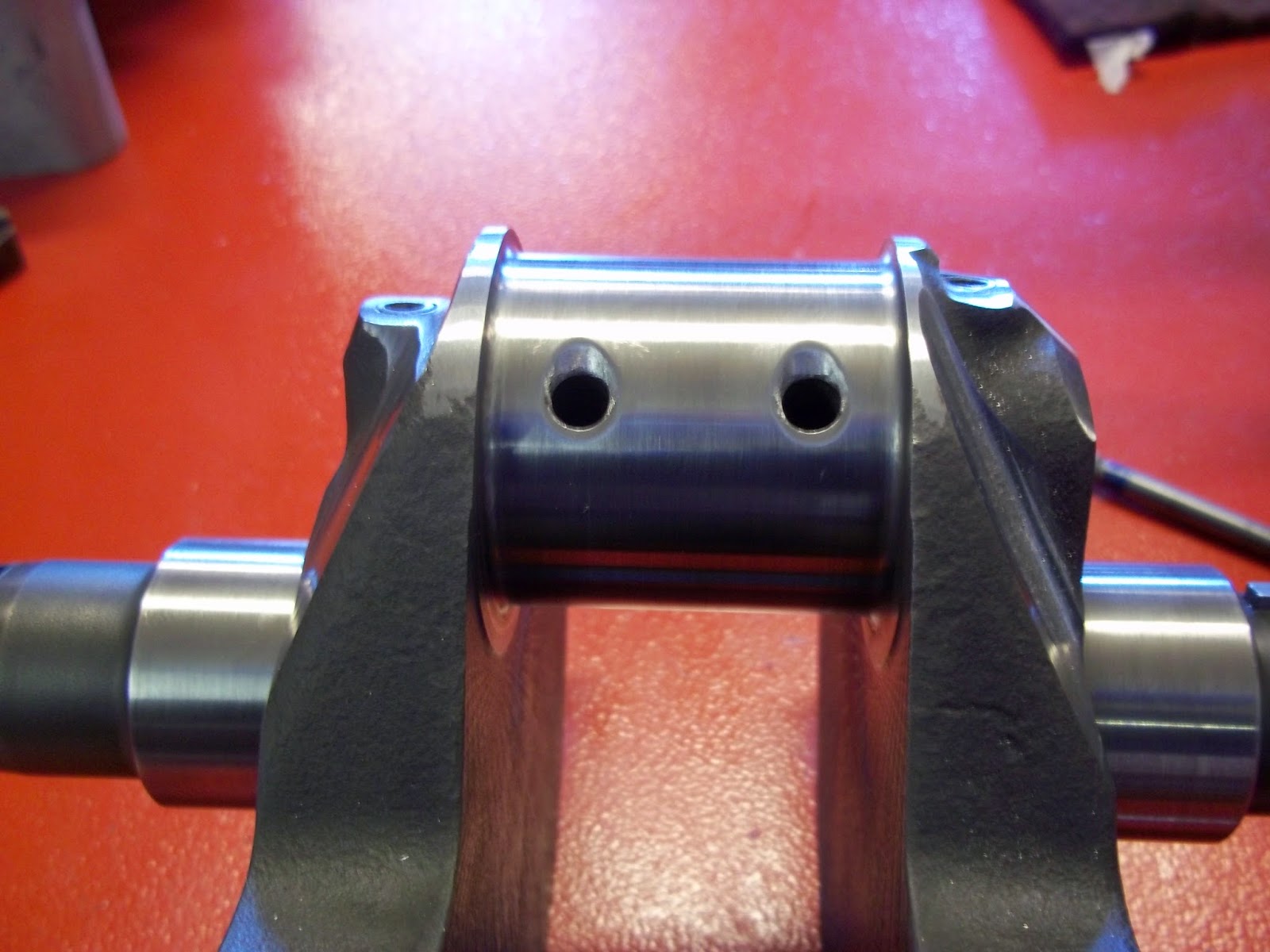 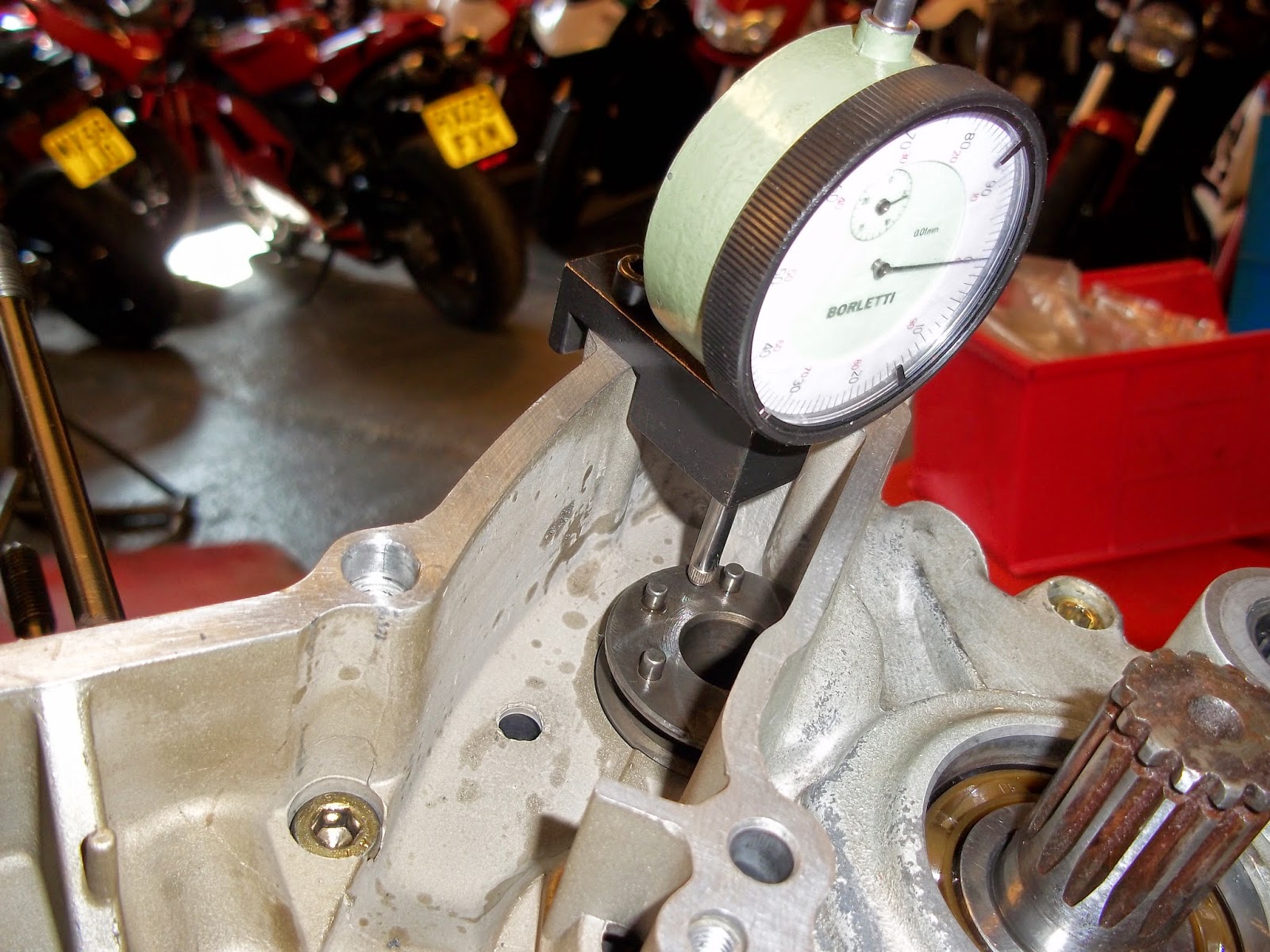 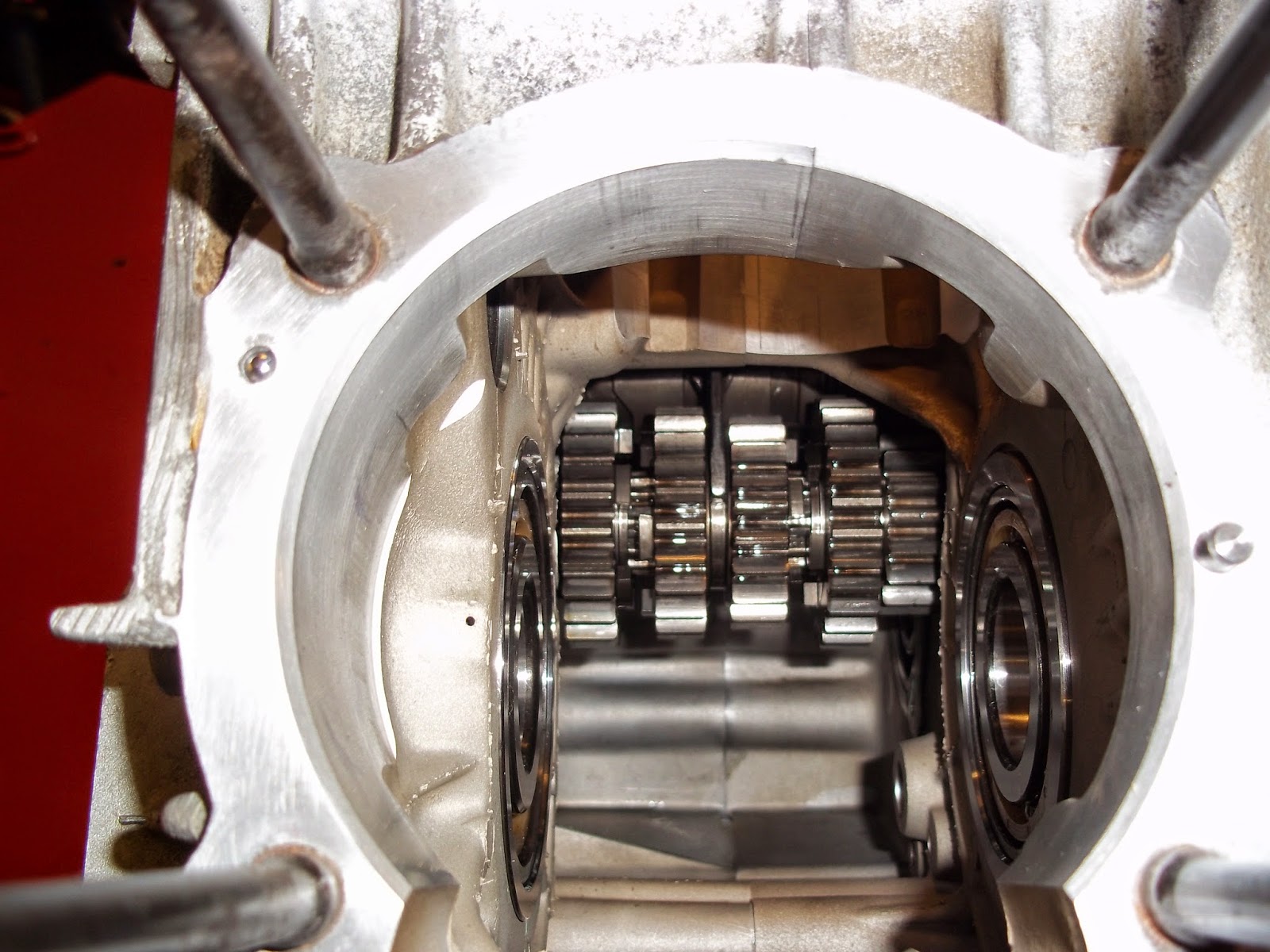 Some of the original lightened gears are re installed. 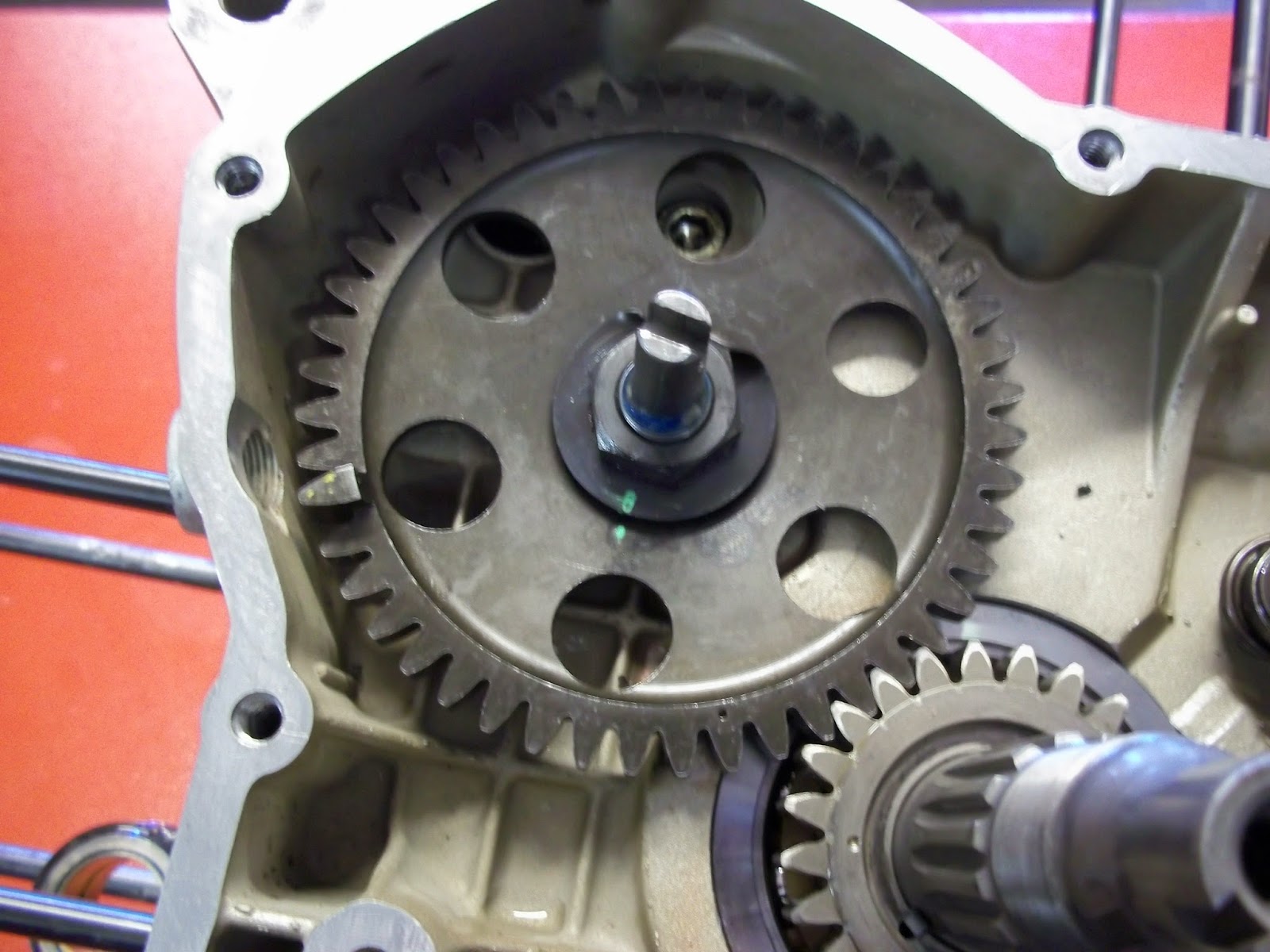 Except for the original primary drive gears, these have been replaced by later 1.84:1 as opposed to the original 2:1, Ah I hear you ask "why?". Right, thanks to Brad for this one, see "Ducati gearing" for the full explanation, but in a nutshell the same tooth on the primary gears now meets every 1888 revolutions as opposed to every other and it makes the gearing a bit longer, ideal for the TT course. 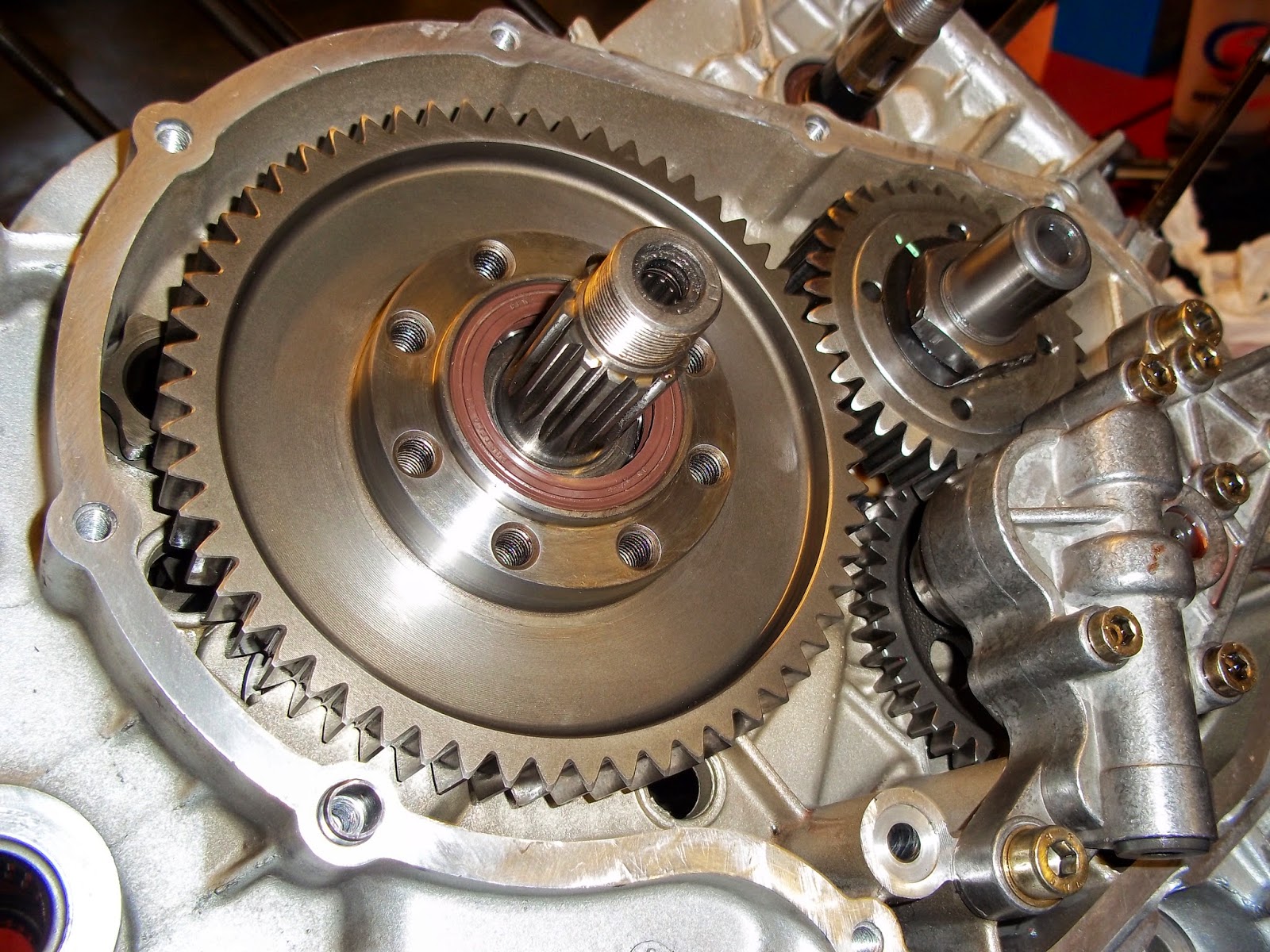 A couple more shots taken by Chris just to show the assembly process. 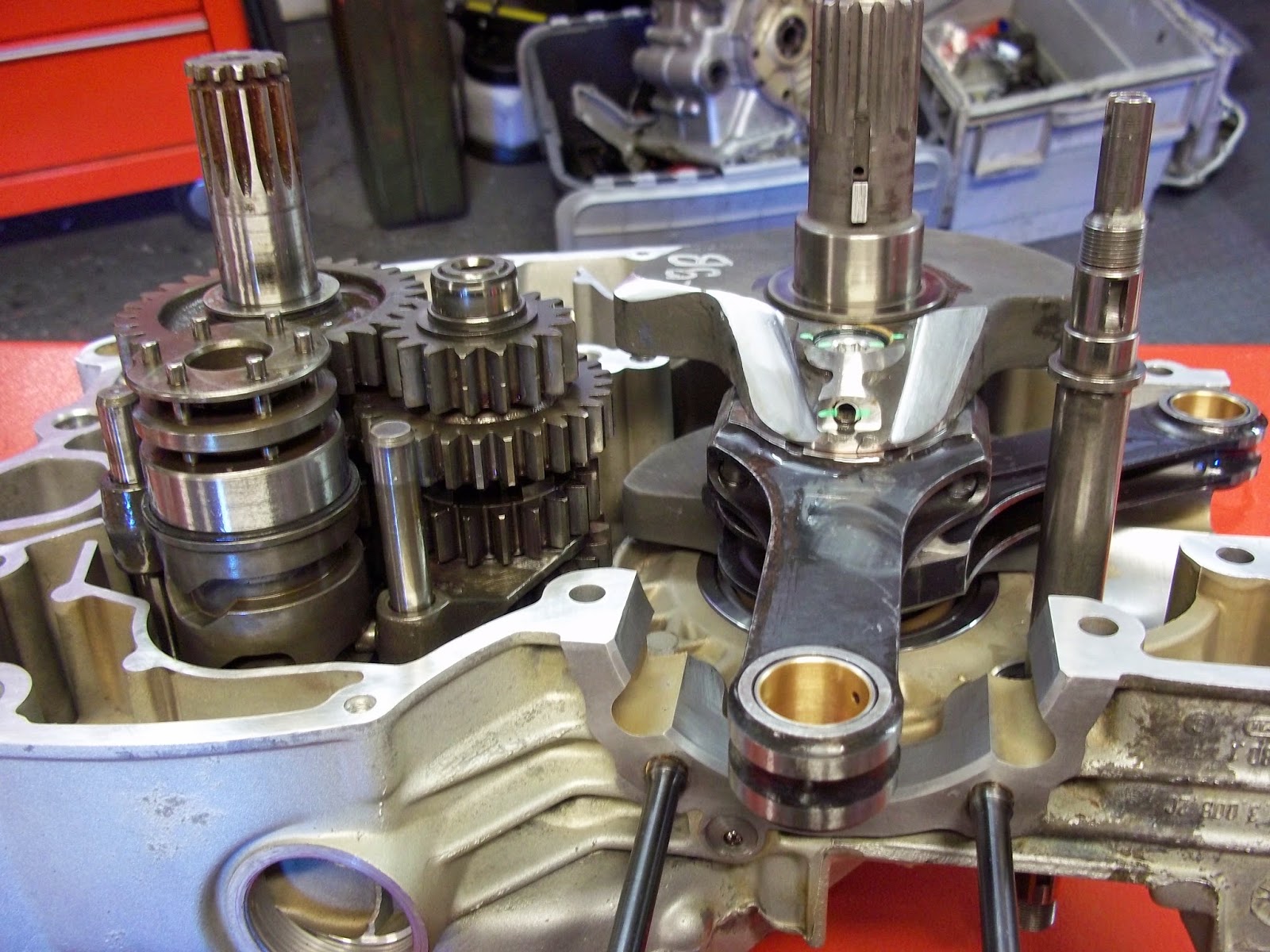 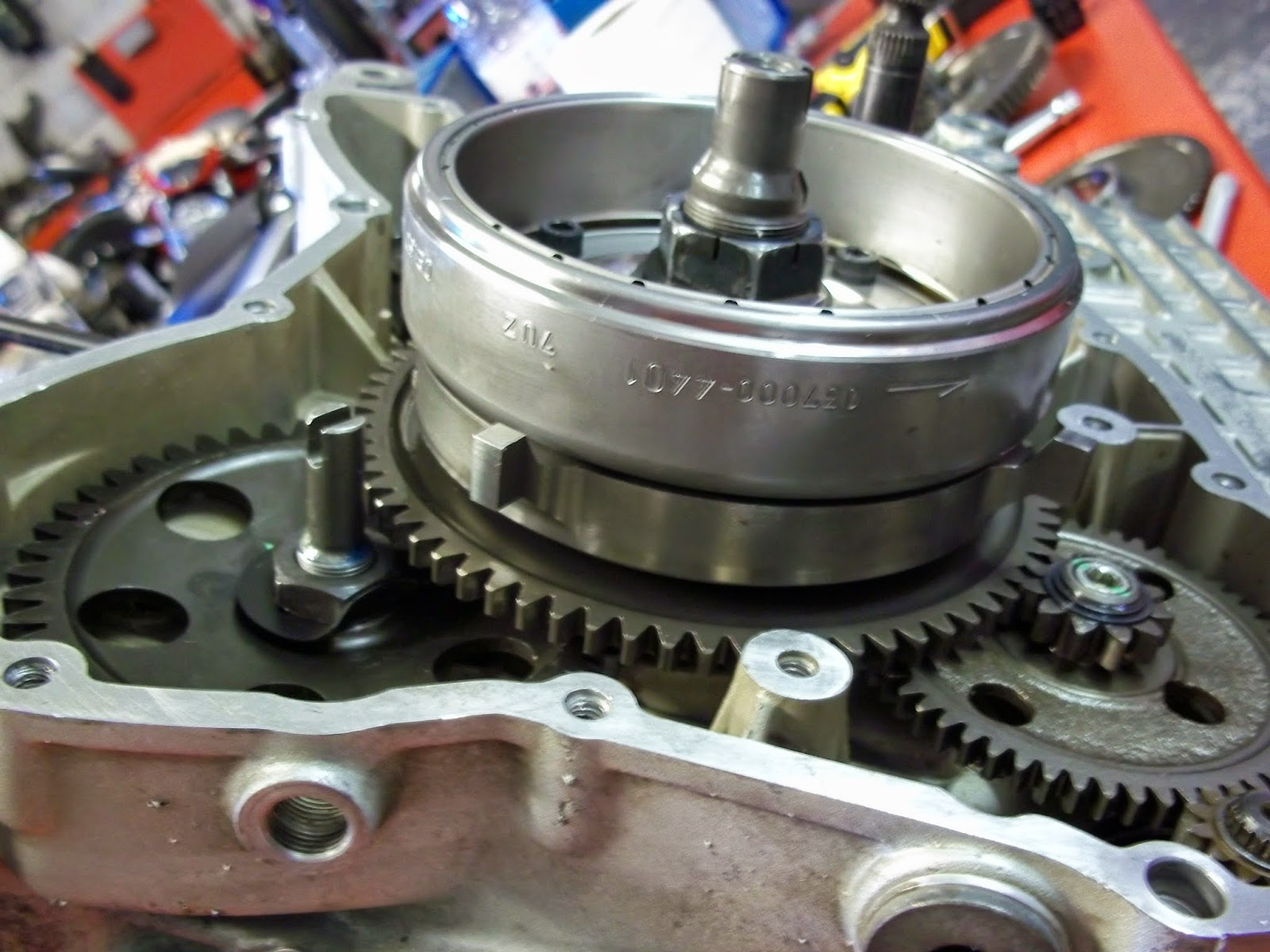 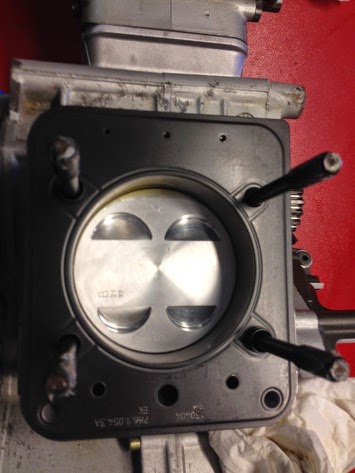 So as always the final part is the grand dialling of the cams. It all seems quite straight forward with some simple maths but you do need a couple of bespoke tools to make it as simple as Chris makes it look though. Timing is set to factory standard for now with the standard cams.

Once completed the last few pieces can get bolted into place like the snazzy Louigi Moto cover and a replacement water pump cover was fitted as the original one was cracked. 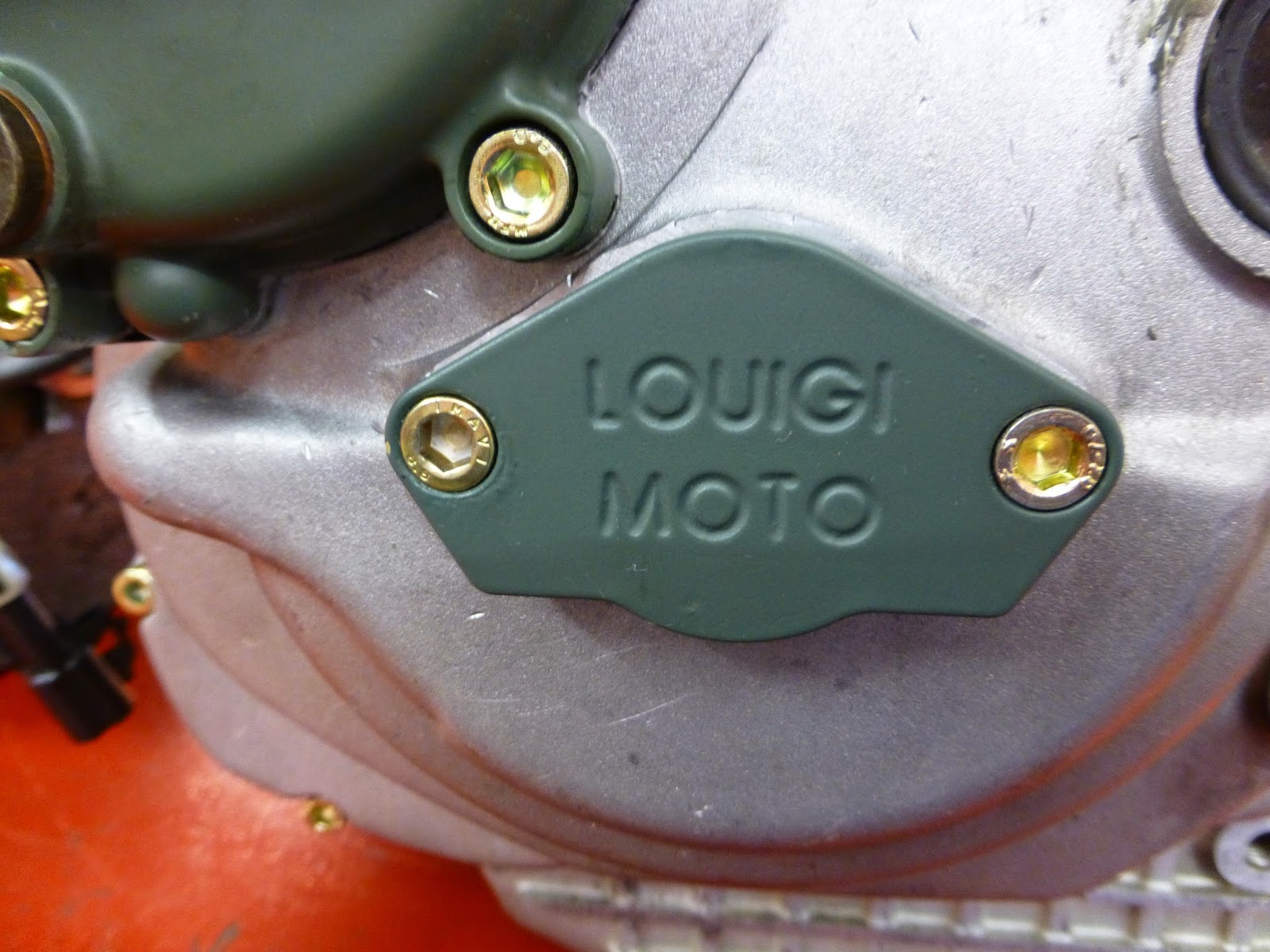 So home again and Stuart found time to pop up and assist in fitting the seat unit, this along with the tank is already at the paint shop D-W-Automotive to try and keep things moving along. Del has done work for me before and it is simply stunning. Emily will look good if nothing else. Which reminds me we have a date at Sammy Millers on the 20th July for the Italian Race Bike Day, eek!
Stu was also strangely drawn to the battery, at 791 grams as a racer I guess you would be. He did seem to stroke it a lot though. 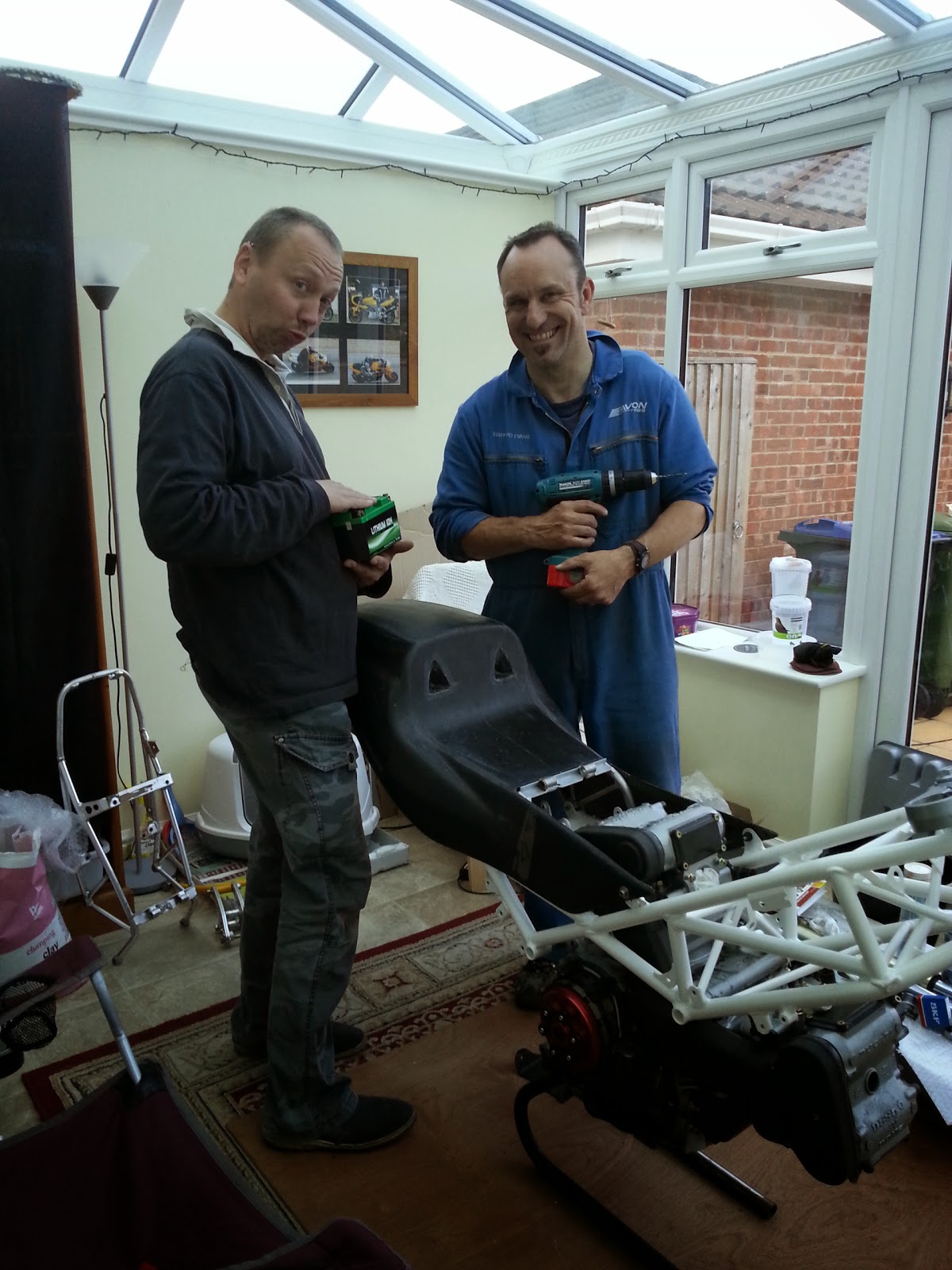 So this weekend is all but over and I've managed to move forward a bit more with rear suspension in but the shock is still to be serviced. Upper and lower hugger fitted, sharks fin added along with what you can see. 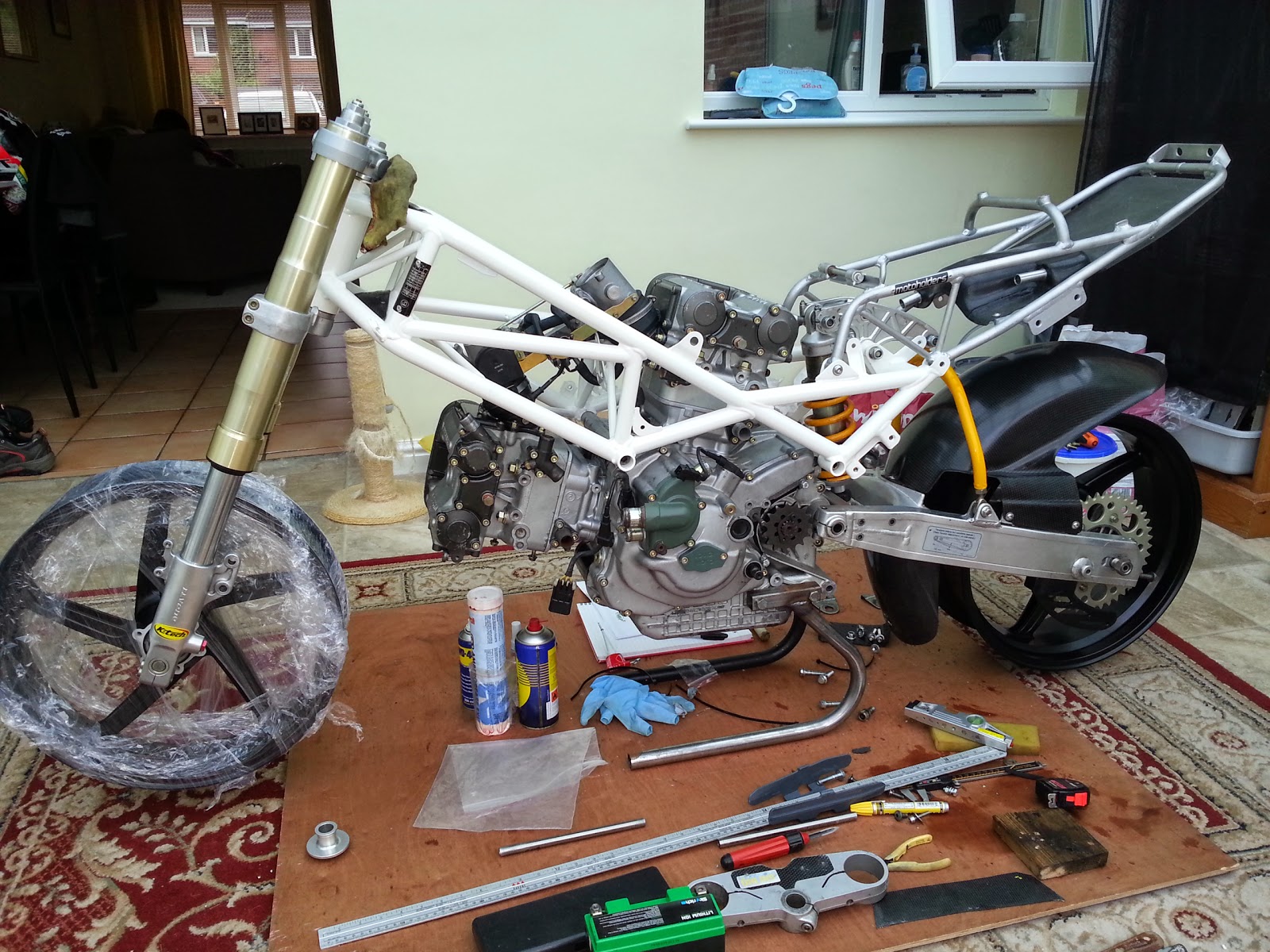 I'll only get a couple of evenings in this week as I'm working away, hopefully as new items are added the build will get easier as at the moment I seem to have to do everything 3 times. Simple things like a worn thread on the sprocket carrier should be easy to fix but you find the previous repair helicoil that had been fitted, out of pitch so the sprocket retaining nut doesn't sit in the counterbore. So that's put to one side and the old 900SSie gives its carrier up for the cause. Ah well you can only ride one bike at a time, just don't tell the wife.
Posted by Unknown at 23:14