Indeed here we go again, after last year with all the trials and tribulations, finally getting in a lap, qualifying and ultimately finishing the race this year, Stuart didn't get an entry. So after both of us investing time, effort, cash and Stuart hanging it out there on the toughest track in the world we got two fingers from the TT committee.  A lot of people have said you need speed to get an entry, well I'm curious.
A. how do you pick a newcomer?
B. If it's said it takes 3 years for a rider to get up some really good pace, where is Stu's 2nd year?
It would appear to be a lucky dip for an entry, unless your name is a famous stout or a brand of tyres. I could rant on for a few more paragraphs but it won't change 'owt as they say oop North.

Still Emily was built with one job and course in mind the Isle of Man TT 37.73 miles of fury. So when I was contacted by another rider with an interest in taking Emily on, the first person I spoke to about it (apart from Liz) was Stuart, after all she was built for Stu and we are a team. Although massively disappointed to not be going himself he did say she's an expensive ornament to be at the back of the garage. So with his blessing I got in touch with this year's potential rider Wayne 'Ciderman' Axon. Wayne rode Louigi Moto's F2 bike last year after Alex Sinclair broke his thumb in practice and Wayne won his class as well. Wayne is also fresh back from the 2015 TT where he competed on his supertwin and finished a very nice 30th with a lap of 109mph. Wayne had met Emily briefly last year at the Classic but obviously we needed to get the two together so we arranged to meet up at Weston Bike night. 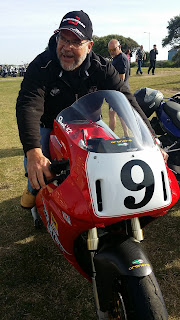 So Wayne got to grips with Emily for the first time, and he seemed pretty happy during a chat over dinner. Unlike last year where we were building down to the wire, this year we have an almost ready to race bike so the next plan was to get together at the North Gloucester race meeting at Castle Combe. There was a set of Classic parade laps during the days so I invited Rich Llewellin and Wayne to ride Emily over the weekend. Rich on Saturday and Wayne on Sunday. 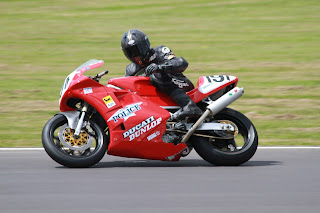 A relaxed Papa Louigi always smiles for the camera.

Not many things are quite as unnerving as waiting for good riders to come back and critique your bike! Happily all that Rich wanted adjusted was the clutch lever and gear lever, other comments were that the fuelling was spot on and all was good, phew.
Wayne got his turn on Sunday and it was pleasing to hear that he is happy as well, just a few tweaks on suspension and seat height.  Reports were positive again and that she pulls and brakes well and handles fine. Hooray, let's go racing.

Things to do are not many but one of the first was an oil and water refresh and the wheels are off as they are at Avon tyres for some new boots for this year, I look forward to trying them myself later in the year. I have to change the rear spring up to 11NM and I'll change the footrests to the carbon set and race shift for the gearbox.

I'll leave you for now with some video of the recreation of a classic start at Castle Combe. Well worth a watch, enjoy.