It's nearly that time already.....

Just days away now from the ferry out of Liverpool and it's all very odd. This time last year, relatively speaking, we were down at Louigi's still sorting out the forks and fitting fairings. A year on and all I'm waiting for are some decals and a product delivery from a new sponsor. Oil filters from John McCann of Moto Merchants are going direct to our digs for this year in Ballagary, thanks John. So nothing that should stop the show now, touch wood.
Last weekend I did the last small jobs that needed to done, this included changing the starter sub loom. This was supplied by Peter at Oronero and now incorporates a relay to mitigate the 11amps that were going through the OEM kill switch, this is normally rated to around 3-5amps and I'd noticed that the connecting wires were becoming warm during the recent test run at Castle Combe. So not quite Corse (copy) now, but hey I don't have the Ducati Corse part! 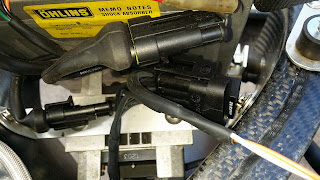 Not a lot of room 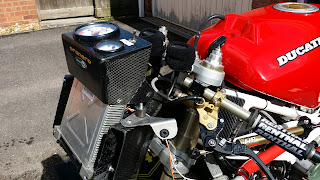 Other small jobs included the adding of titanium bolts to the suspension rocker, I'd noticed that the head of the original cap screw was just kissing the crankcase breather hose as it goes into the underseat airbox, I think made the fitting come loose last year, so with less weight and a shallower heads that fixed that. The rain light required for practice only is also now in place, the bracket was made a year ago but in the end was not required but this year it is. There have also been changes to the pit stop regulations, no paddock stand for this year along with no visor for the fueler but new higher rated overalls for the fueler are required. So the overalls for last year are now not correct, I can only assume money grows on trees.
Emily has made a couple of appearances recently, at Calne Bike Day and just last weekend at the Popham Megameet. I must say she certainly did draw a lot of attention and anytime we were near that were plenty of questions to be answered about her and some very complementary comments about her looks. Some of the PR was done by last years pilot Stuart. 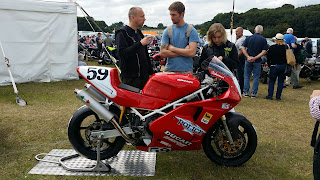 Sadly someone appears to have lost interest.

When we get to the Isle of Man on Friday Wayne has a new piece of foam for the seat, just a tad thicker than the show piece in the picture above. I'll go through the bike with him as a final check to make sure I've not missed anything, we can adjust the foot controls and if he's happy to go play roll on Saturday. Just the van to pack now complete with my daughter Harriet who going to join us this year as team photographer for those behind the scenes candid shots, that's of course if Liz and her aren't off horse riding together.
Wish us all luck, and I'll post a link to the live timing for the race if the organisers are using it for the Classic TT for those who'd like to follow the action on line. #59.